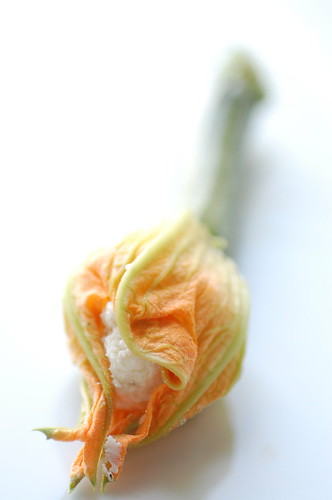 I’ve just noticed, but a quick scan of the recent titles for the stonesoup entries over the past few weeks do seem to have had a bit of a debaucherous ring to them. I mean first there was the killer hangover in all its self indulgent detail and then came a strip show all be it of the vegetal variety. And this week things seem to have taken a further step on the downwards path, yes this week we have a de-flowering.

The first thing that got me thinking about flowers of the edible variety was when I was on a date last week with a guy who you could only describe as an ‘ideas man’. Things were going pretty well, we were dining at Vini one of my favourite little Italian hole-in-the-wall places in Surry Hills. We were both lamenting the arcane liquor licensing laws in NSW that make it prohibitively expensive for anyone to open those groovy little wine bars that Melbourne and pretty much all of Europe does so well.

Over a lovely pinot gris Mr Ideas was enlightening me with the work he has been doing with a group called Raise the Bar that is lobbying for a change to the licensing laws (for details of how you can help, see below). So far so good. And then the conversation turned, as it inevitably does when I’m around, to food. After a quick look at the menu which included a divinely sounding zucchini blossom pasta dish, Mr Ideas confessed. While he was a big fan of all things edible and Italian food in particular, there was one thing that he just couldn’t do.

Apparently I was on a date with a man who couldn’t eat flowers. At first I thought he was having a lend of me but soon I realized he was for real. When I probed to find out what it was exactly that was the turn off all he could come up with was that it seemed weird and just not right to be eating a flower. Well you can’t argue with that.

Of course the eating-of-flowers thing stuck in my mind, more so than Mr Ideas, so I decided to serve some as a starter for the pasta extravaganza that had been rescheduled due to the cook and host not being in guest worthy shape a few weekends ago.

As we sat around the table on my balcony on a mild Sydney Spring evening, I told the story of my date and the inspiration behind the dish. It turned out that we had not one but two new comers to the flower eating thing. Yep Ades and Robbie were not-exactly-vestal flower virgins. To which my wine merchant mate Rhys quipped ‘Oh good so we’re having a deflowering then’ and another dubious blog title was born.

I need to come clean here, the brilliant idea to roast the came from those talented boys over at Sydney’s best tapas joint, Bodega. While I love their version of flowers stuffed with delicious morcilla, a Spanish blood sausage, accompanied by a shocking slick of carrot puree, my more traditional take with cheese and basil holds its own in the deliciousness stakes and is a far less daunting proposition for first time flower eaters.

Initially, the idea of baking drew me in because I’m not a big fan of frying (large quantities of hot oil are scare me) but then there was the added bonus of the end product looking much prettier and more floral than a crispy golden battered blob. Win-win.

This is one of those great dishes that has some serious ‘wow’ factor but is relatively simple to prepare. Really the most difficult part is actually sourcing the blossoms. Feel free to go with full fat ricotta, they were all out when I was shopping, but cut back on the amount of oil in the filling.

Preheat oven to 200C (400F). Mix ricotta, parmesan, lemon zest nutmeg and 3T olive oil in a bowl and season. Transfer to a large piping bag without the nozzle attached. Gently open the petals of your flower and pipe in the filling. Twist the ends closed and place on a tray lined with baking paper. Repeat until all the flowers are filled and refrigerate.

When you are ready to serve, drizzle oil over the flower stems and place the baking tray in the oven. Bake for 10-15 mins or until the filling is starting to brown and the stems are becoming tender. Allow to rest for a few minutes and then transfer to a serving platter lining up the flowers so the stems are parallel. Combine basil oil and lemon juice and drizzle over the flower stems. Grate over a little parmesan and serve warm.

basil oil
makes approx 1C
Adapted from one of my most recent cookbook acquisitions, A Year in my Kitchen by Skye Gyngell.

Flavoured oils aren’t something that I’ve really ever been into but the lovely Skye, a girl from Oz now cooking at the acclaimed Petersham Nurseries restaurant in London, inspired me to have a go.

Wash and spin dry basil leaves and whizz in a food processor along with the garlic until well chopped. Gradually drizzle in oil and season. Will keep in the refrigerator for a week or so.

about raise the bar
Raise the Bar is a community campaign for you to voice your opinions on new liquor licenses being proposed for NSW. The new laws will be decided upon in the coming weeks so we must act fast.

The last time NSW had a new Liquor Act was 1982, when Malcolm Fraser was Prime Minister and the CD hadn’t even been invented! We can’t spend another 25 years without licenses the rest of Australia takes for granted.

Don’t let your voice be drowned out by people who can pay for influence. The monopoly on NSW liquor licenses is damaging NSW socially and economically. Be a part of the change NSW has to have

To find out more including how you can send your MP a virtual drink head to http://raisethebar.org.au or check out their very modern Facebook group.

and another note:
It’s only taken 4 months but I’ve finally updated the ‘about the author’ section of stonesoup so feel free to check it out while it is truly up to date. Something is bound to change soon.