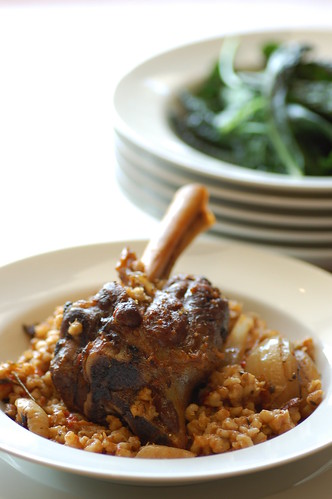 l have a confession to make…I have a thing for legs….. While I am as partial as the next girl to a footballer with bulging quads, what really gets me going is fauna of the edible variety and funnily enough my favourite bits tend to be below the waistline…..

Whenever I roast a chook there is no contest for me between a succulent full flavoured drumstick and the ho humm white-meated breast….I’ll take the leg every time. And when it comes to duck confit there’s nothing like a crispy maryland. I’m even quite partial to the occasional plate of frog’s legs. And my absolute favourite bits of a crab are those fiendishly difficult to extract morsels tucked into the claws.Â

Then there’s your legs of the larger variety: beef and veal that are sliced a la osso buco to reveal the jewel that is the bone marrow…yumm…But all this pales into insignificance when compared with the perfection that is lamb shanks. Meltingly tender lamb slow cooked so that it mingles with the flavours of the braising liquid…..d-i-v-i-n-e.

A quick scan of the stonesoup recipe list in the meat and poultry section is a testament to my love of lamb and shanks in particular. This winter there’s been Indian inspired lambshank vindaloo, a Moroccan lambshank tajine with prunes and almonds, and a vaguely Spanish dish of shanks with white wine and chickpeas….a pretty diverse list.

My latest shank recipe was inspired by Maggie Beer’s lamb & barley casserole from the fab ABC show the cook & the chef that the gorgeous Deborah from The Food Palate gave me a link to a few months ago. All that was needed then was a tasty crostini of cauliflower tapenade to kick things off andÂ  something sweet to finish…..a creamy lemon baked cheesecake accompanied by zesty spiced cumquats…all good things…

Cauliflower is one of my new found vegetable loves, mainly thanks to the guidance of Jared Ingersoll’s great book Dank St Depot.

The awesome thing with this dish is that the barley soaks up all the cooking juices to become a delicious risotto-ish accompaniment to the meltingly tender shanks without all the stirring. Thanks to the dynamic Maggie Beer for the inspiration.

Preheat oven to 150C. Heat oil in a large heat proof casserole dish and brown shanks over medium heat. Remove shanks and add onion. Cook stirring for a few minutes to just start to get some colour in the onion but don’t worry about getting it soft. Add garlic and cook for another minute.

Add wine and deglaze the pan. Return shanks and add remaining ingredients except the barley. Wet a piece of greaseproof paper large enough to cover the surface of your dish and place this over the shanks. This will keep the tops of the shanks moist but will allow some evaporation.Â  Place in the oven an cook for 3-4 hours turning the shanks every now and then.

Meanwhile bring a large pot of salted water to the boil and simmer barley for 20 minutes. Drain barley and add to the shanks once they have been cooking for about 1 1/2 hours. The barley will soak up the cooking juices so you may need to top up with extra stock or some water if they start to look dry.

When the shanks are meltingly tender and almost falling off the bone season with s&p and serve with wilted greens passed separately.

Note: If you are short of time feel free to cook the shanks at a higher temp. Like all good stews this can be made ahead and reheated when you’re ready to eat.

The lemon cheese cake was adapted from Karen Martini’s version recently published in Sunday Life. There aren’t many things that can trump a good baked cheesecake and this one ticks all the boxes- tart creamy cheesy goodness without being cloyingly sweet or weigh-you-down heavy.

Andy Bunn at Sopra, the upstairs cafe at Fratelli Fresh provided the inspiration for the spiced cumquats. As a cumquat virgin, I was a bit uncertain about these cute tiny citrus jewels. When eaten whole & raw the sweet crunchy skin provides a perfect counter point to the tart citrussy centres. After a bath in a spice scented sugar syrup they make a gorgeous fresh adornment for our cheesecake.

Andy also added a couple of dried chillis to his cumquats but since I was cooking for my sensitive-palated mum I gave these a miss but will give them a go next time.

Line a 24cm springform pan with baking paper & grease sides with butter. Whizz biscuits in a food processor to coarse crumbs. Add butter & cinnamon & mix until combined. Press crumbs into the base of the tin & freeze while you make the filling.

Preheat oven to 170C. Place all filling ingredients in the bowl of a food processor and process until smooth and well combined which may take a while. It’s important to have your cream cheese at room temp so you don’t run the risk of burning out your food processor motor.

Pour filling over biscuit base and bake for 1 hour until filling is just set. Turn off oven and allow cheesecake to cool in the over for about half an hour with the door open. Serve at room temp or chilled with spiced cumquats.

For the cumquats combine sugar and water in a medium saucepan and bring to the boil, stirring occasionally. Simmer for 5 mins then add the cumquats and spices. Simmer another 5mins then remove from heat and allow to cool.Â  Great with cheesecake but would also work well for breakkie with some natural yoghurt and a crunchy topping of semi toasted muesli.