I’ve developed a bit of a new theory about nutrition. It’s pretty widely accepted that most people consider themselves to be good drivers, when in actual fact they aren’t. But I’m starting to think that our reality check on the healthiness of our diets might be in a similar position.

Last year, after my third ‘dingle’, I finally admitted to myself that I might not be the best of drivers. (Happy to report that 2010 has been accident free!). And now, after having a good dig around nutritionist Kathryn Elliott’s blog Limes & Lycopene, I’ve come to the realisation that I don’t eat as many veggies as I should. But enough about me. Let’s see what Kathryn has to say…..

JULES: I’ve been a fan of your blog Limes and Lycopene for years now. I think we’ve been blogging for about the same time. I’ve always wondered what inspired you to become a nutritionist?

KATHRYN: It really came out of a life long love of food, coupled with an awareness and interest in how food affects our health. My mum is a really good cook and she was also interested in healthy food, so I grew up eating lots of vegetables, wholegrains, legumes and being encouraged to try different foods. I also had really bad eczema as a kid, and through that became increasingly aware of the connection between the food I ate, my eczema and also my health and wellbeing in general. I found this really intriguing, interesting and potentially powerful.

KATHRYN: The big gaping hole for the vast majority of people is vegetables – they’re simply not eating enough. And that’s true of the general population. Even the best estimates only have 30% of Australians eating the basic minimum amount of vegies each day. So a lot of the work I do is around encouraging and increasing vegetable awareness and cooking skills – talking about how to use them, ways to make it easier to prep, how to get more into your day and so on.

JULES: The world of nutrition and diets tends to be a confusing one for even people that are food interested, what’s the most simple way for the average person to eat well?

KATHRYN: Eating has become immensely confusing. I have a lot of sympathy for Michael Pollan’s criticisms of “nutritionism” (despite being a nutritionist!) for making food difficult, when it really shouldn’t be. I guess I have four basic guidelines that I try to follow personally, and encourage others to try:

1. To eat as wide a variety of foods as possible
2. Include plenty of vegetables – more than you think
3. Try to get in tune with your hunger signs
4. Don’t over-eat . . . and don’t worry about leaving food on your plate

JULES: I was having a poke around Limes and Lycopene and I came across a few posts on eating 5 serves of vegetables a day. I think I might be one of those people you mention who thinks they have a healthy diet but doesn’t actually eat enough veggies. Can you share with us why 5 serves are so important and how we can make sure we’re getting enough veg?

KATHRYN: You’re not alone Jules, as I mentioned before, even the best estimates are that only 30% of Australians are eating the five serves. I was also reading a NY Times article earlier in the week saying just 26% of Americans are having three or more serves. It’s one of the big public health failures, that despite all the promotion and talk about the importance of vegies people are not getting enough.

Being blunt, if you’re missing out on vegies, then no matter what else you’re doing, your diet isn’t really that healthy. They’re too important. Vegetables are packed full of vital nutrients, many of which are not available from other foods and despite what the supplement manufacturers might say, you can’t get them from a pill either, you have to get them from foods. Making sure you have enough vegies is going to make you feel better now, but they’re also your insurance against health problems in the future.

JULES: What are your thoughts on organic food? Are we getting better nutrition with the higher price tag?

KATHRYN: The jury is still out on that one Jules. It’s actually incredibly hard to test the nutrient levels and come up with a definitive answer, because there are so many other factors which affect the nutrient content of foods – how it’s harvested, stored, prepared, the time since harvest, and so on. And in fact the whole debate is complex, because organic is not just about nutrients, it’s also a farming system which taps into issues of sustainability, food security . . . and so on.

More and more what we’re seeing is that freshness is the key. Doesn’t matter if it’s organic or conventionally farmed, if your spinach is two weeks old the nutrients will have significantly degraded. Plus the organic or not debate shouldn’t distract from the importance of eating fresh foods. Research clearly shows the importance of fruit and vegies, so if you can’t afford organics, or your local supermarket only stocks wrinkly, old organic vegies, then buy the freshest food you can and use that.

JULES: You’re a vegetarian I understand, I’m always fascinated why people choose different diets. What was the driving force behind your decision to stop eating meat? Have you ever considered going the whole hog (pardon the expression) and becoming vegan?

KATHRYN: Becoming a vegetarian was a decision I made about 18 years ago, after becoming aware of some of the animal welfare issues around conventional framing. It was a documentary on pig farming which tipped me over the edge! Originally I’d planned to eat organic meat, because of their better animal welfare record, but I just couldn’t afford it and back then organic meat was incredibly hard to find.

I have thought about going vegan and I find myself eating less and less dairy these days. But I still eat eggs and find them such a useful food – both nutritionally, and also for easy, end-of-a-long-day meals.

JULES: What advice would you give anyone considering becoming vegetarian or even vegan?

KATHRYN: Read up on it first. It is possible to eat really well and be healthy both as a vegetarian and a vegan, but you have to know what you’re doing.

KATHRYN: An Honest Kitchen is a collection of recipes, photographs and articles based on real food. By this we mean the kind of food that you might cook when you come home from work exhausted, but still wanting to eat well. There are so many celebrity and chef cookbooks out there, full of complicated recipes and photographs of glossy, sexed up, unattainable food. While they may be fascinating, they can intimidate a nervous cook. Everyday cooking is not rocket science and we wanted to show that healthy food is possible and also delicious.

We focus on being honest about food – what’s involved in making a meal, how we approach cooking, what you need to take care with and where short-cuts and fudges are possible. This honesty also extends to Lucy’s photography. All the photos are taken in our kitchens, with natural light. The food is simply plated and then photographed before being devoured. No post production involved.

Over the last few months we’ve been taking a break from An Honest Kitchen, but we’re still cooking, eating, talking and thinking about where to go from here. We have some exciting plans, which will unfold over the next few months.

JULES: I recently received a question in the comments of stonesoup from a reader which I thought was more up your alley. Nic writes: ‘I have a non dessert question…I’ve been eating one of your 5ingredient recipes almost every night for the last 3 weeks and I’ve noticed that whilst I’m certainly enjoying my dinners much more, I’m not eating the variety of vegetables each night that I used to. I’m still eating a variety over a period of week, just not each day. My question is nutritionally speaking, if I’m still eating the same quantity of vegetables and a variety over the week, is it as good as eating a variety of vegetables everyday? I was definitely suffering vegetable boredom before eating the same veggies every night so I’m hoping the answer be that it’s just as good!’

KATHRYN: Variety is really important – it’s one of the best ways of ensuring you get all the nutrients you need. Given how important vegies are, it follows that it’s also a really good idea to have a variety of vegies. If you do this every day, then great, but you can also do it over the week, as your reader mentions, and even over the month.

JULES: And finally, thanks for taking the time to talk to stonesoup. I saw on Twitter that you’ve recently been chook sitting. Are you thinking about getting your own urban chickens?

KATHRYN: Oh yes! I’ve been chicken minding recently, for some friends who went overseas and it’s been a good test run to find out what having chickens is really like. I’ve loved it. They’re such funny, nosy, cheeky creatures and I found myself really sorry to see them go. I’m missing them (and the eggs) enormously. So yes, I’m looking at getting a couple of my own, in the next few months.

And Jules, thanks so much for asking me to be a part of Stonesoup. 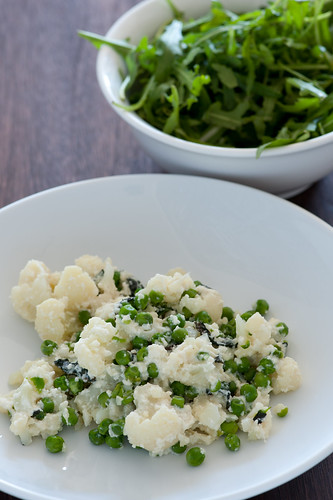 If you’re not into cauliflower, you could always serve this sauce with some short pasta.

Frozen peas work a treat here. The trick is to cook them long enough so they’re nice and sweet and tender. If peas aren’t your thing (I understand completely!) you could use double podded broad beans instead. Or just skip the veg and go for a ricotta-cheesy cauliflower dish.

For a dairy-free option, cook the peas in some chilli oil, toss in the cooked cauliflower and finish everything off with a squeeze of lemon and some toasted sliced almonds.

1. Bring a medium saucepan of salted water to the boil.

3. Meanwhile, heat a few tablespoons extra virgin olive oil in another saucepan. Cook peas over a medium high heat for 5 – 8 minutes, or until peas are tender and starting to go a little wrinkly.

4. Remove from the heat and stir through the mint.

5. Drain cauli and return the peas to the heat.

6. Toss cauli in with the peas and add ricotta. Stir until ricotta is heated and coating everything. Taste & season.

A big THANKYOU to everyone who applied for the Stonesoup Virtual Cookery School Scholarship. I was a little overwhelmed by the interest. I’ll be notifying entrants of the results of their application in the next day or so and will announce the winners here (if they’re cool with being announced) on Monday.

In the mean time, it’s not too late to register for Solve Your Dinner Dilemma, the 4 week class starting on Sunday. Head over to stonesoupvirtualcookeryschool.com for more details.